"Neatly Roaled & Fastnd at Their Backs": The Use of Blanket Slings by the South Carolina Continentals

OK, a little background info on blanket slings, prior to our making them at the 2nd SC regimental workshop this coming weekend:

Blankets were an indispensable item for the men of the 2nd Regiment. They were regimental property, like muskets, and considered just as essential. They were also chronically in short supply. Proper heavy blankets were not widely made in South Carolina, and were thus usually imported from Europe. As the war ground on, supplies from overseas dwindled, and inflation skyrocketed. By 1780, blankets were the single most expensive item issued to the soldiers. For these reasons, each soldier was expected to personally carry his blanket when on the march, whether on campaign or simply transferring posts.

Native Americans are well documented to have used leather or web straps to carry large loads. These went by many names: tumpline, tompline, trumpline, topline, burden straps, hoppis, hoppees, hoppess, etc.; all of which mean roughly the same thing: a strap for carrying things. These could be slung over their shoulder, around the chest or over the forehead. When carrying blankets, the blankets were well-documented to have rolled the blanket around the strap, tying it up with the long ends of the strap or with separate straps, forming a bedroll.

During the French & Indian War, British troops frequently abandoned their clunky knapsacks in favor of the tumpline, especially Light Infantry. At one point, General Lord Howe actually had his entire army use tumplines: "Their haversacks were rolled up in a blanket, which they carried as did the Indians and Canadians." 1

At this point, I refer you to an excellent blog dealing with F&I and Revwar research entitled "Of Sorts for Provincials". The author has a well-researched post on the tumpline: http://ofsortsforprovincials.blogspot.com/2011/04/1-hoppis-david-hastens-tumpline.html

Note that about halfway through the post, there is a quote from the Journals of Henry Laurens; this documents that uniformed South Carolina Provincial troops used "tomplines" in 1763, at the close of the French & Indian War, only 12 years before the Revolution.

By the Revolution, the British were familiar with the use of straps to carry their blankets. As documented in the "Of Sorts" blog post, there are numerous references to British troops using what are called "blanket slings." These were made of hemp or linen webbing, and were sewn into some form of carriage to better or more efficiently secure the blanket than the tumplines used in the earlier war. In effect, the blanket sling was a military, European-ized version of the tumpline.

Other quotes in the "Of Sorts" blog post attribute tumplines to Continentals in Virginia and other states. Further documentation exists, including paintings: Xavier Della Gatta's painting of the Battle of Paoli [2] clearly shows Continental troops wearing their blankets rolled up on their backs; these are worn quite horizontally, suggesting a strap across the chest, rather than one worn over the shoulder (note Continentals casualties in the foreground). And Della Gatta's painting of the Battle of Germantown [3] shows the entire light infantry of the British 40th Foot wearing white blankets on their back in similar fashion to the Continentals at Paoli. 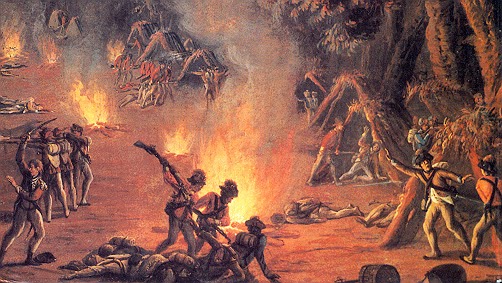 Although no descriptions of either British or American blanket slings exists from the American Revolution, by 1800 a very similar item was standard among British troops. They were now called "greatcoat slings"; by this time British soldiers were issued greatcoats for cold weather use. During summer campaigning, however, the coats were ditched, as frequently was the knapsack, and the soldiers used the greatcoat slings to carry the blankets on their back, either over the shoulder or across the chest. The following pics show how they were worn (respectively) by the 3rd Foot Guards in 1800[4], and at the Embarkation for Corunna in 1808 (also note the serjeant's valise)[5]; the third pic is a modern photo of what is reputed to be the only known extant British blanket sling from the Napoleonic Wars (dated 1804) [6]. 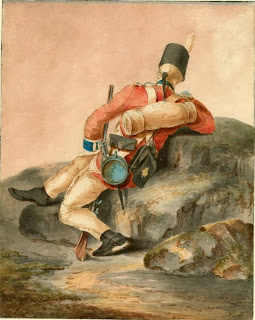 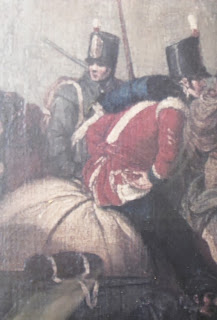 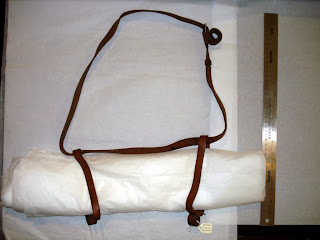 So, back to the original question: how did the South Carolina Continentals carry their blankets without knapsacks? Let's refer to two key pieces of evidence from the 1st S.C. Regiment:

January 6 1778
"…The whole Reg.t are to be Powdered clean Shaved & in a Soldier like Dress in Order to Make a proper appearance in their march Throught the Town, their Blankets are to be neatly Roaled & fastned at their Backs, the Reg.t will land at Ropers wharf…" 7

March 1 1779
Camp at Purysburg
"…We rise here a little before Day break, the Men turning out with their Haversacks and Blankets on the Backs…" 8

These two records suggest that the men had their blankets rolled and strapped on their backs, not horse collar-style over their shoulder. This means that the men were provided with some sort of carrying strap. There is nothing in the records showing that the men were issued this sort of item. All expensive items, including leather shoulder carriages for bayonets and cartridge pouches, were carefully recorded, and soldiers were held accountable for their loss. Many necessary items, however, were provided to the men and not recorded at all: plates, cups, musket tools, etc. This suggests that, whatever the design of blanket straps, they were relatively inexpensive and fairly disposable. This eliminates the possibility of leather tumplines in favor of linen or hemp webbing and rope. Both materials were relatively plentiful in South Carolina throughout the war; the only notable clothing shortage shortages always revolved around the scarcity of wool, especially broadcloth.

With all this in mind, here is the arrangement we are adopting for blanket slings in the re-created 2nd Regiment: 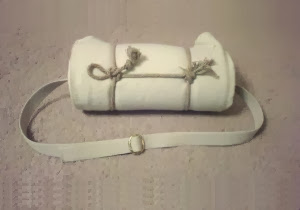 The shoulder carriage is a strip of 1.25" hemp webbing, 5 feet long, adjusted by a brass slider buckle. The blanket is rolled around the sling, in tompline fashion, and is secured by a 5-foot piece of 1/4" hemp rope. Again, this piece of equipment is pure conjecture, as we have no hard documentation for its use or construction. The balance of available evidence simply suggests that this is the best educated guess we can make for a piece of equipment they clearly had, but did not consider significant enough to comment upon.

Local archeologists and living historians believe they have located the location of a long-lost Revolutionary War fort on the Ashley River near Bacon's Bridge, S.C. The site matches the descriptions left by William Moultrie and Francis Marion of earthworks and a campsite guarding one of Charleston's inland approaches.

Check out the full article from the Charleston Post and Courier at this link:

Seeking Forgotten Fort on the Ashley


Steven Steele, a local F&I/RevWar reenactor and historian in the Summerville area, is involved in the research, and is quoted extensively in the article. Check out his terrific blog:

We are pleased to announce a partnership between the 2nd Regiment and Veteran Arms, LLC. Based in Georgia, Veteran Arms has a reputation for selling high-quality, affordable reproduction arms and accessories. They have been actively involved in reenacting for over 20 years, and as such are dedicated to making their muskets among the most authentic in the hobby.

Veteran Arms has recently introduced a French model 1768 Charleville musket, and the reviews have been very good. Under our new exclusivity agreement, all 2nd SC members who purchase a new musket should purchase this particular musket from Veteran Arms. In exchange, our members will receive a significant discount, making this easily your best bet amongst companies selling similarly priced muskets.

Of course, members can certainly buy used muskets at their discretion; hey, if you find a bargain, take it. And if you want a $1200 Pedersoli, well, go for it. But if you want a great new mid-priced musket (like most of us use), you will want to take advantage of this new arrangement with Veteran Arms. Contact me (Zack) before you order; I'll give you the info needed to receive our discount.

Check out the 1768 Charleville and all the other Veteran Arms products at www.veteranarms.com.
Posted by Zack Pace

When you buy the products from Amazon and Zazzle featured below, a donation is made to the 2nd SC!